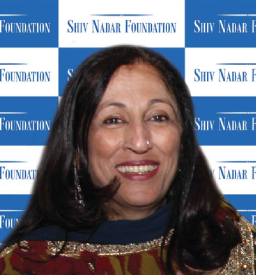 Kiran Nadar is a trustee of the Shiv Nadar Foundation and Chairperson, Kiran Nadar Museum of Art (www.knma.in). She is also an acclaimed international bridge player, a philanthropist and an avid art collector.

She is a key driver behind demystifying art to the common man through the KNMA, a philanthropic initiative in art. She has been acknowledged as a ‘hero of philanthropy’ by Forbes Asia Magazine in 2010 for launching India’s first philanthropic private museum.

Kiran is a Trustee of the Shiv Nadar Foundation, which among its transformational educational initiatives has established the SSN College of Engineering in Chennai, today among the top private engineering colleges in India, Shiv Nadar University, VidyaGyan schools, Shiv Nadar School and the Kiran Nadar Museum of Art. Drawing from her diverse and rich experience in advertising and communications, Kiran plays a very important role in defining the architecture and the aesthetics of the Foundation’s initiatives.

Kiran is also member of the Rasaja Foundation, an educational, scientific and cultural institution created in 1984 by the late Jaya Appasamy, a renowned artist, art historian and art critic. As a representative of the Foundation, she has also been involved in a joint initiative with the Rajiv Gandhi Foundation to promote the education of the Dalit and Muslim girl child in some of the most backward districts in the State of Uttar Pradesh in India.

An advertising, communications and brand professional by background, Kiran started her career at MCM. Then came her stint at NIIT – a company that grew out of Shiv Nadar’s vision for computer education in India. Kiran was responsible for shaping the NIIT brand in its formative years with Rajendra Pawar and was closely involved in its brand building strategy. She is one of the top Indian players of competitive bridge as a member of the “Formidables” team, and has not only won many laurels at the National level but has also represented India several times in international competitive bridge events.