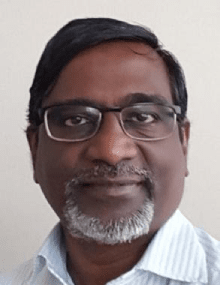 Dr. Chandrabose Aravindan is a Professor at SSN College of Engineering, Chennai, India, since July 2002, and is currently the head of the department of Information Technology. He received his B.E. degree with honors in Computer Science and Engineering from National Institute of Technology, Trichy, India, in 1986 and M.E. and Ph.D. degrees in Computer Science from Asian Institute of Technology, Bangkok, Thailand, in 1990 and 1995, respectively. His post-doctoral research was with the University of Koblenz, Germany, during 1995-1997, where he worked as a Research Scientist on a funded project in the area of disjunctive logic programming. He has been in academia as a professor of Computer Science since 1998.

Aravindan is a member of the Machine Learning Research Group of SSN and his research interests include machine learning and pattern recognition, logic programming and formal methods, and high-performance computing. Twelve research scholars have already completed their PhD under his supervision and he is currently guiding one more scholar. Aravindan has completed five funded research projects, and has published about 50 papers in international journals and conferences.

1. Co-investigator of a project on Deep Learning for Stenosis Detection, Funded by the SSN Institutions, Chennai, India. (2018 – 2021).

3. Principal investigator for setting up a High-Performance Computing Lab at the SSN campus with a funding of Rs. 10 lakhs from the SSN Management. (2007)

4. Co-Investigator of the project on Application of neural network concepts to the analysis of multi-drug pharmaceutical formulation, funded by AICTE, New Delhi, India. This project was jointly carried out with Department of Pharmacy of Annamalai University, India, with Dr. K. Kannan as the principal investigator. (2000-2002)

5. Principal Investigator of the project on Development of micro-kernel and device drivers for the Unix operating system, funded by AICTE, New Delhi, India. (1999-2000)

6. One of the investigators of the research project on Disjunctive Logic Programming funded by German Federal Agency DFG and carried out at the University of Koblenz, Germany. (1995-1997)